A dance performance facing themes as borders and freedom. The production, led by the international creative trio Marie Goudain (France), Jaro Viňarský (Slovakia) and Václav Kalivoda (Czech Republic) in collaboration with the festival TANEC PRAHA and the J. Rosinský Elementary Art School in Nitra, has been emerging for over a year. The cast and co-authors are teenagers from Nitra and Prague who attended creative workshops in the two cities, along with lectures on contemporary dance, and the very process of creation and rehearsals. The young performers, in conjunction with the three professional artists, share with the audience the imprint the current era and the approaching adulthood has left upon them.

Working with teens and the artist Marie Gourdain.

The steps of this process: 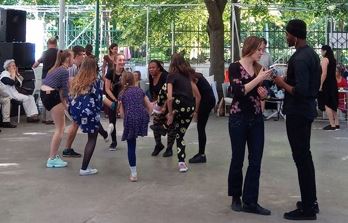